This product has been discontinued.

Here are some notes from the recent assembly by our new tech guru.

2) DO NOT populate SW22. Previously we noted in the MOD instructions that SW22 was not required.  Well as it turns out, it’s much better to just not populate it at all. SW22 was intended for switching between the internal signals and the DIN connector. Populating SW22 and not having it switched in the onboard position will cause erratic behavior.  This is the most common issue! So, it bears saying again.  DO NOT populate SW22.  Instead, short the switch as shown in the image below. 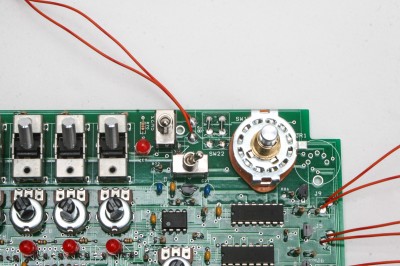 3) SW17, the rotary switch is oriented so that the tab is on the right side.  See the photo above.  We bent the tab down to make it more noticeable and it also makes fitting into the 16 step case we have easier.

4) The DIN connector is not included in this kit. The DIN was placed in the circuit for future features however those have not yet come to fruition and will likely not happen before the 16 step is redesigned to be more assembly friendly.

5) J1 is not a standard stereo jack.  J1 must be shunted, ie the ring and tip are shorted together when nothing is plugged into it.  This is essential for the clock signal to propagate properly.  See the picture below to see what a shunted jack looks like.  There are others, but this is the most common. 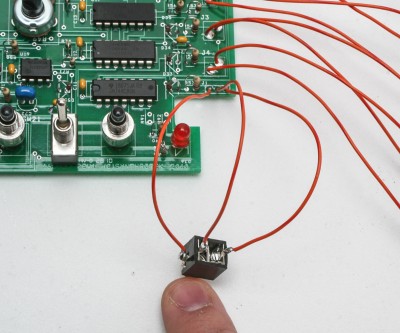 6) Wiring for J1 can be seen in the above photo.

7) Populate and channel switches before the 10k potentiometers. The switches are shorter than the pots, so if you do the pots first the table will not hold the switches tight to the board for you making soldering easier.

8) Pay special attention to the orientation of U21 (TLV2370).  The dot or notch goes toward the top.

Below are a few more pictures of our recently completed 16 step you can look at if you have more questions.  Also, don’t hesitate to email us if you have questions.