Attention: These are the assembly instructions for the OLD version of the Tube Screamer Wired.

If you purchased the “No Pop” version of the TS, check out the assembly instructions HERE.

If you’ve received your kit and are ready to build, the first step is to ensure you have all of the parts and familiarize yourself with the PCB and where the parts will be going. 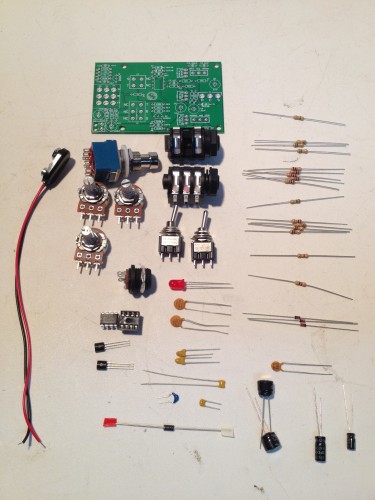 Check your kit against the Bill of Materials. If you are missing anything let us know and we will ship you the part(s). 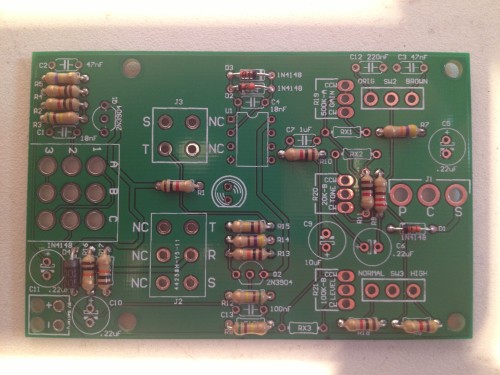 There are 18 resistors and 4 diodes to install. The resistors are not very sensitive components and are not polar, but the diodes are polar components and must be soldered in the correct orientation. On the silkscreen of the PCB for each diode there is a line on one end. You will need to match the line on the diode with the line on the silkscreen. 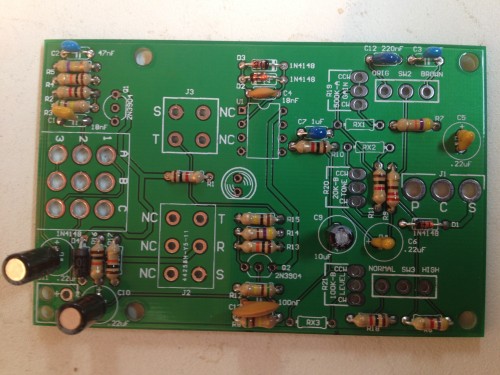 NOTE: There are mistakes on the silkscreen indicating that C10 and C11 use .22uF capacitors and C4 uses an 18nf capacitor – this is NOT the case. Use 47uF capacitors for C10/C11 and 51pF for C4 as indicated on the BOM. 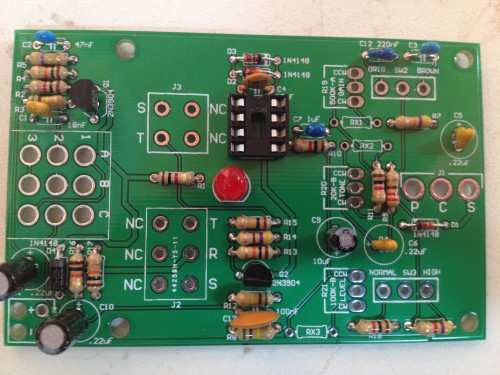 Next we will install the LED and Transistors. Both of these components have one side flat side that matches up to the silkscreen on the PCB. If you have a hard time identifying the flat side on the LED, the side with the shorter lead has the flat edge. If you are intending to mount the circuit within a case you may want to install the LED with wired leads. The IC socket will have a notch on it that should be aligned with the notch on the PCB’s silkscreen. 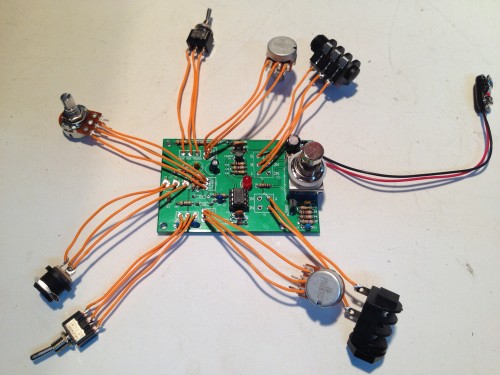 Install the potentiometers with the orientation shown above – with the adjustment knob facing you, the left pin should be connected to the the contact labeled ‘CCW’ and the right pin to ‘CW’.  The SPDT switches can be installed in any orientation so long as the outer pins connect to the outer contacts and the center pin connects to the center contact. Connect the red lead of the 9v battery connector the ‘+’ contact, and the black lead to the ‘-‘ contact.

The ‘In’ Jack of the Tube Screamer circuit uses a 1/4″ stereo jack which turns off the power sources when nothing is plugged into it.  When you plug a mono plug into the jack, the circuit receives power.

Stereo jacks have three solder lugs for the 3 different parts of the stereo signal: Tip, Ring, and Sleeve.  On the PCB, they are identified as ‘T’, ‘R’, and ‘S’.  Attach each solder lug on the jack to their respective PCB connection. Make sure to use the solder lugs as pictured above.

On the other side of the board is the ‘Out’ PCB connections.  They are marked ‘T’ and ‘S’ for ‘Tip’ and ‘Sleeve’.  Mono jacks only have these two connections, so they are easy to wire up. 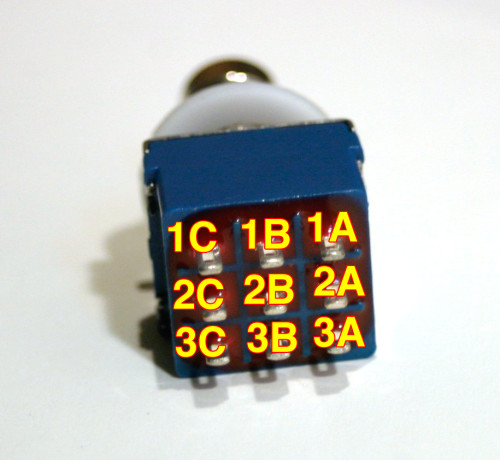 For the 3PDT stomp switch, match the silkscreen to the labeling shown above. You may wish to install the switch with wired leads if you are intending to mount the circuit within a case.

The DC Jack is fairly straightforward.  Connect three wires to the DC Jack’s solder terminals and, using the picture above as a reference, connect them to the PCB at their respective through-holes. The center pin will be negative.

Once all of the wired components and stomp switch are connected, your circuit is complete and ready for testing.