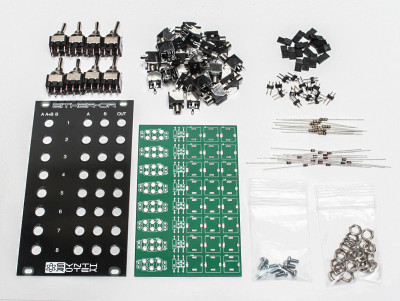 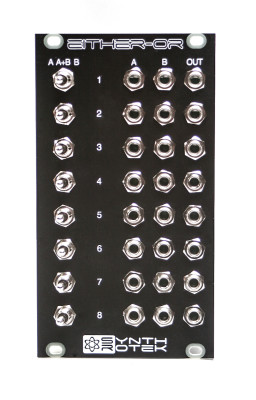 The Either-OR is an 8-channel switchable OR Combiner logic module.   The Either-OR allows the user to switch between 2 signals per channel, or combine both of the channels for an OR logic output.

There are also 2 jumpers per channel on the back of the module that allows the user to select between a center OR combiner or a center mute function, or ‘off.’

The Either-OR allows the user to combine gates, triggers and other logic signals into a single combined OR output.

There are 8 numbered rows that can be daisy-chained in order to input many multiple logic sources, resulting in complex gate or trigger outputs.

This is a passive module and thus does not need a voltage connection or power cable.  The passive diodes produce a slight voltage drop between the input and the output of each channel. As a gate combiner it will combine 2 gate inputs to produce an OR function on the output. When combining CVs the highest positive input will appear at the output with about 0.7 volts of drop.

The Combine-OR is available as a fully assembled module or in kit form.  The kit can also be assembled to switch between audio signals with a center mute. To make the center position a ‘mute’ or ‘off,’ remove both jumpers from rear header pins (on each channel).

3. Module Depth (from back of front panel): 1 inch