Welcome to the LoFi Fuzz Distortion Kit Assembly Instructions!  This circuit is an easy build and you’ll be done in no time at all.  Let’s get started! 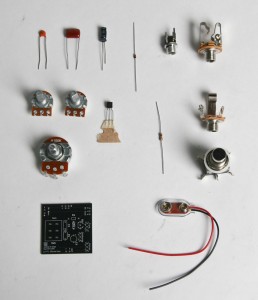 Before starting any successful electronics project, it’s a good idea to lay out all of your parts and make sure that you check it against the BOM.  If you are missing anything from your kit, we’ll send it to you free of charge.

Alright, now that you have all the parts, let’s get started building our circuit!

We start with the components that are soldered directly to the PCB.  Doing so keeps the working area small and manageable.  We’ll be adding the wired components later. 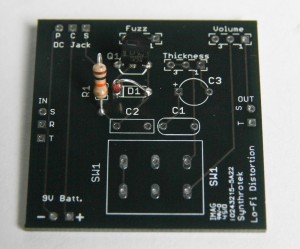 Find the silkscreen identifier R1 located on the top of the PCB.  Insert the leads of the 10kΩ resistor into the through-holes and solder the component to the PCB.

The diode D1 is a polar component, which means that you will have to be careful about which lead goes into which through-hole.  If you look closely at the body of the transistor, you will notice that there is a thin black band next to one of the leads.  That is the negative lead of the diode.  The silkscreen identifier for D1 has a vertical white band next to a square through-hole.  This is where the negative lead of the diode will be inserted. 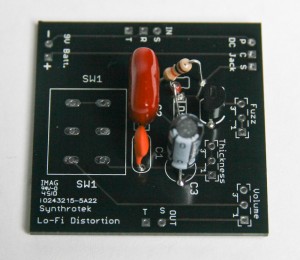 C1 and C2 are non-polar capacitors and their leads can go into either hole designated by the silkscreen. 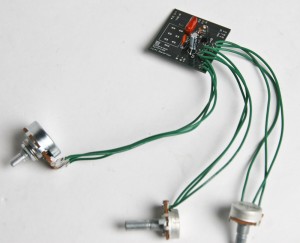 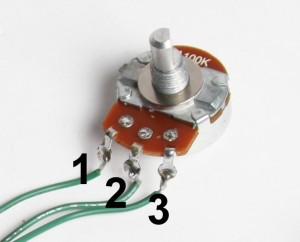 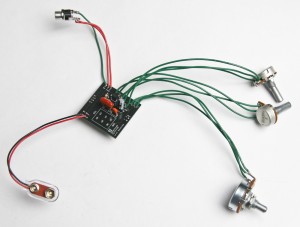 The DC jack requires a little extra attention.  On the board, the ‘DC Jack’ silkscreen has a ‘P’, ‘C’, and ‘S’.  These should match up with the DC Jack’s wires (see picture above).

* Your PCB may not look exactly like the photo, that is ok. What is important is that you short the same pins as shown in the photo. 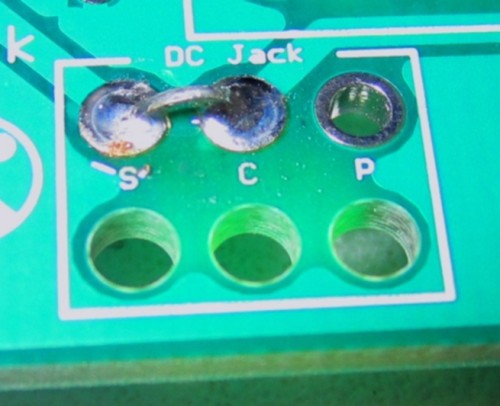 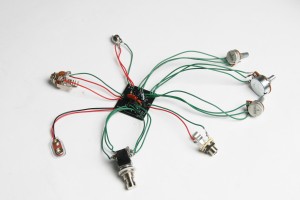 Align the DPDT switch’s solder lugs with the PCB through-holes for SW1.  This is how the wires will be attached to the PCB. 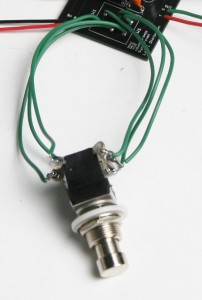 When the switch is pushed, the input signal will switch from a clean signal to a distorted signal that is processed through the circuit. 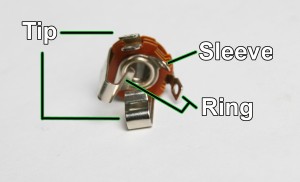 Locate the silkscreen labeled ‘In’.  There are three labels next to it: ‘T’ for Tip, ‘R’ for Ring, and ‘S’ for Sleeve.  These connections are for a stereo jack input. If you are unfamiliar with the solder lugs on a stereo jack, see the picture above.  The solder lug directly beneath the Tip solder lug is not used in this circuit.

In this configuration, power will be used by the circuit only when there is mono plug connected to the jack (especially useful with a guitar, which normally uses a mono signal). 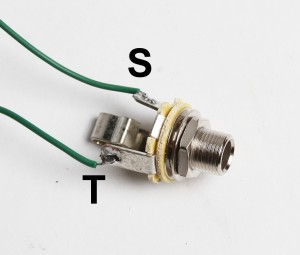 That’s it!   Congratulations on your very own hand-made LoFi Fuzz Distortion!  Keep coming back to these instructions, as there are several ways to modify the circuit for different sounds!

This mod allows you to have an LED turn on when the circuit is active.  When you press the bypass switch, the input signal will bypass the circuit and the LED will turn off.

You will need a 3PDT Switch, a 1kΩ resistor, and an LED.

If you have already constructed your circuit with a DPDT switch, remove it from your circuit.  The 3PDT switch will replace its true bypass function while also switching the LED on/off. 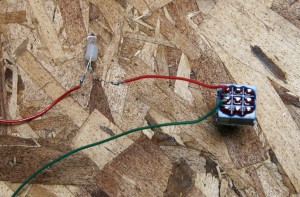 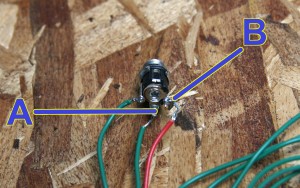 The last step is to match the wires from the PCB at SW1  to the 3PDT switch (use the diagram above). 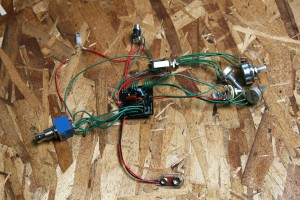